Cured, dry sausages have existed ever since salt has been used to preserve food. These foods were described starting in the year 3000 BC; in Egypt where seasoned foods (meats and fish, for example) were sold. At that time, salt was expensive and rare because the Egyptians had to obtain it from the deserts and from the Jews in the Red Sea.

If we go back even further in time, the prehistoric man would cut the meat into thin strips and let it dry in the sun to preserve it. On other occasions, the meat was pulverised and mixed with fat. Later, with the discovery of fire, the number of different options for preserving meat increased, taking advantage of the benefits of cooking and smoke.

If we situate ourselves in more recent times, during the 15th century, animals were raised outside of the cities, killed in meat cutting rooms and their pieces were later sold to butchers. But with pigs it was a different story: they were raised in villages, killed in the streets and the families prepared the cured meats. A tradition that is still maintained as of today in some Spanish towns.

It wasn't until after the mid-nineteenth century when meat processing evolved and began to be industrialised, thus facilitating trade and the movement of goods. In addition, in this period, the use of different condiments in the preparation of cured meats resurfaced.

There's no question that cured meats have existed since very distant times. Another example comes from the ninth century BC, where Homer describes the consumption of blood sausages in his poem The Odyssey, making reference to guts stuffed with blood and fat that were roasted over fire. In other classical Greek works, there is mention of ham, bacon and cured sausages, as in the case of a comedy by Aristophanes, where one of the main characters was described with a jar full of chorizos.

An anecdote worth remembering is that of the astronaut Pedro Duque, who took chorizo with him on his journey to space. Another story is that of Alfonso XII, Spanish king between 1874 and 1885, who was a fan of salchichón sausage, in particular the salchichón from the city of Vic, and the story goes that every time he visited the city, he had to do three things: visit the bishop, go to the cathedral and go to the salchichón factory.

Throughout history, the cured sausage has evolved, adapting to the demands of the era and eventually to modern times, in which it now relies on the use of different technological advances for its production.

Composition and Classification of Cured Sausages

Meat products refer to all food products that are prepared in whole or in part with meat or with offal from species that are authorised in the Spanish Food Code (CAE) for this purpose and that are subjected to specific processes prior to consumption. The sausages are prepared using minced meats, then they either do or do not undergo a curing process, with or without the addition of edible offal and pork fat, vegetable products, seasonings and spices, and then are finally introduced into a natural or artificial casing. In addition, the sausages can be fresh, marinated, smoked, cured, salted, etc. In short, there is a wide range of products that can be obtained from pork and other meats.

1.- Meats: they usually come from pigs or cattle, although other species can be used. In some cases, religious restrictions determine the type of meat that is used.


The meats must have the following characteristics: Pork is the type of meat that offers the best flavour and texture; the meat must be lean and firm, and should not come from pigs that are used for reproduction.

2.- Fats: basic component of all cured sausages, their absence would lead to a product with a hard consistency, bad taste, little or no juiciness, etc. The fat can be part of the mass of the sausage itself as a result of its infiltration into the meat, or added in the form of fat, rinds, etc. In addition, fat is essential because it has a positive effect on the sausage's sensory and organoleptic qualities. The fatty acids infiltrate the flesh, making it juicier and lightening its colour; they also influence the product's maturation, taste and final consistency. It should be noted that the fat used must be hard, since soft fats accelerate the process of the product turning rancid.

3.- Water: contributes to the paste mixture and reduces the amount of heat during the manufacturing process, neutralising the heat generated by the friction of the blades when cutting the meat, which may cause protein denaturation. The allowed percentage of moisture is anywhere from 30 to 45%.

4.- Sugars: they are used to flavour and mask the taste of the salt; they also favour the penetration of the agents that are responsible for the product's salting.

5.- Starches: they improve the consistency of the mixture and come from wheat, corn, rice and starch flours. They act as thickeners, preservatives and stabilisers. Likewise, they also act as activators of some of the agents that are involved in the product's maturation.

6.- Salt: flavouring used for the blandness of the fats and meats, in addition to acting as a preservative that protects against contamination by microorganisms.

7.- Food additives (approved by the CAE): they make it possible to obtain improvements in the production process and preservation of the products. Additives can be natural or artificial and must be explicitly authorised by food legislation, even in regards to their quantities and handling, thus guaranteeing a final product that is safe for consumption.

Some of the additives used are:

7.1.- Preservatives: they increase the food's shelf life and help to preserve its quality for long periods of time, in addition to its hygienic and organoleptic properties. Antimicrobial preservatives prevent the proliferation of harmful microorganisms that can alter the food and in some cases cause poisoning. In the case of nitrates and nitrites, in addition to protecting against botulism, they provide cured sausages with their characteristic red colour.

7.2.- Antioxidants: used to prevent the rancidity of fats and the oxidation of fat-soluble vitamins such as vitamins A, D and E. They help to accelerate the reddening and colouring of the sausages, they inhibit the growth of bacteria, improve the product's taste or enhance its preservation. Likewise, they help with the curing process and affect the texture and homogeneity of the cooked pieces.

7.3.- Dyes: they are added to improve the appearance of the product or to recover any loss of colour that may occur during the production process.

8.- Condiments and spices: they are used to create a wide variety of different sausages. Mixtures of various spices are often used. When added in small quantities, certain spices such as pepper, thyme, rosemary or garlic offer antioxidant properties in addition to providing aroma and flavour.

Classification of cured sausages according to ingredients, condiments and processing 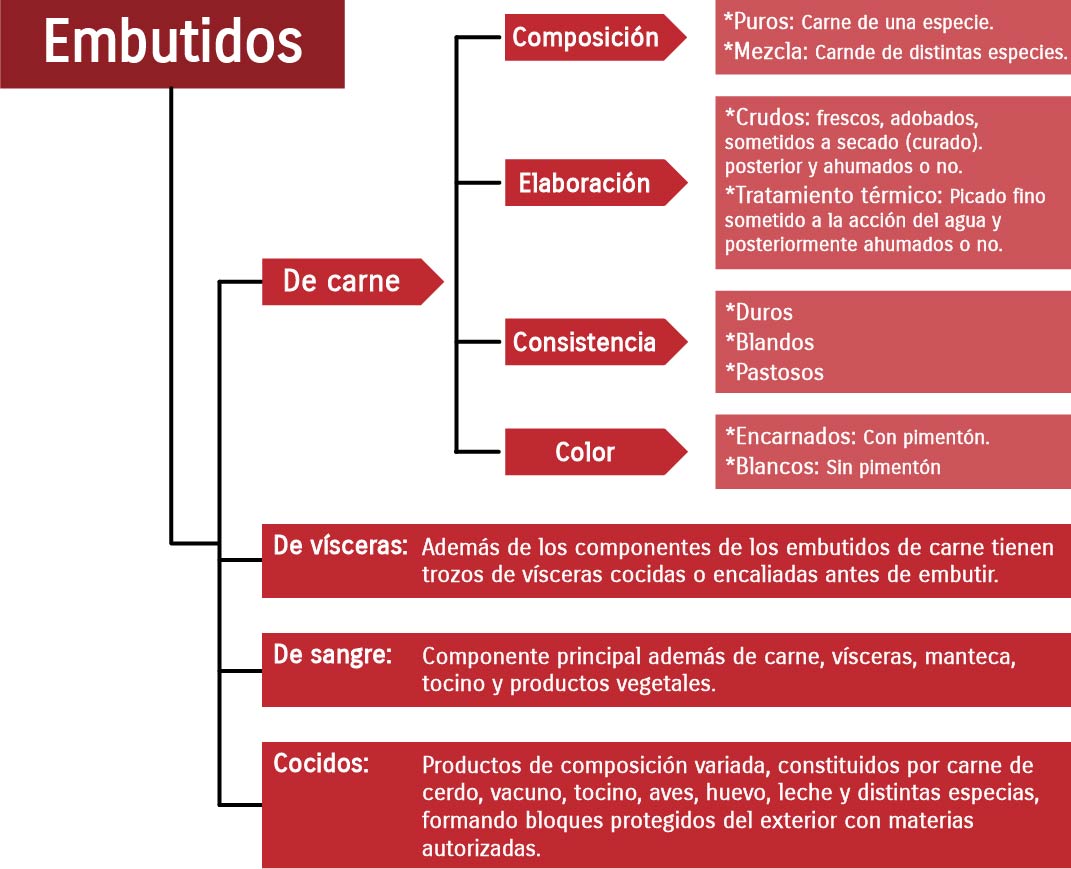 A natural casing is used in traditional "pure" sausages of medium-sized production, and come from different parts of the digestive system and bladder of cows, sheep, swine and horses, among others. It is produced in authorised industries in which the relevant sanitary processes are implemented. When the animal is sacrificed, the digestive system is removed and the large and small intestine are separated. They are washed inside and out to remove the intestinal mucosa, they are sterilised and their length and diameter are measured to later be stored with preservatives (lactic acid). This type of casing is edible, permeable to water and smoke, fragile and uneven in diameter and length.

An artificial casing, on the other hand, is obtained in registered industries through different manufacturing processes with different authorised materials. It is manufactured from animal tissues or materials derived from cellulose. It is used in the products that come from large manufacturers where, in addition to quality, its resistance, flexibility and homogeneous size is also essential. This last quality, as well as the ease with which it can be separated into several parts, are two of the biggest advantages offered when compared to the use of natural casings.

Artificial casings can be:

1.- Made of collagen: the most natural of all artificial casings. Its similarity to a natural casing in terms of fibres and porosity allows the sausages to be cured and preserved as if they were in a natural casing. The larger the size of this type of casing, the greater its thickness. In addition, this casing must be removed before eating the product. It is used for dry, cured and smoked sausages. During the curing process, the casing adheres perfectly to the product because it shrinks at the same time as the meat. It is ideal to be used with salchichón, fuet, blood sausages, chorizos, sobrasada, chistorra and salami. The most resistant type is used for pork loins, smoked dried beef and pancetta.

3.- Made of polyamide: waterproof and heat-shrinkable, used for sausages that are subjected to high pressure (pâtés, hot dogs) and speed, comes in different sizes.

Finally, in the case of cold cuts, they must be properly moulded and protected from the outside by thin sheets of fat, cellophane, or other authorised or canned materials, contained in animal membranes or any other type of authorised enclosure.