The Map of Ham in Spain

Enjoy the best Iberico and Serrano Ham  Visit our shop!
The importance of Iberian ham in Spanish cuisine is undeniable, it is one of the country's most emblematic products. The quality of the ham depends on its breed, how it is raised and its diet, therefore it is important to know the different areas of Spain that produce Iberian ham as well as other types such as Serrano ham, which also play an importante role in Spanish food.

If we look at the differences between the different types of ham and the areas in Spain where they are produced, we end up with a distribution map that shows the different geographical areas responsible for their production. This is what we will focus on here.

Before getting into the different production areas, first we need to review a few related concepts:
The main difference between both terms is that in the case of a product covered by a P.G.I., it is not mandatory for all phases to have been carried out within the same geographical area; it only requires at least one. In the case of the D.O., all phases of production must be carried out within the geographical area.

The D.O.'s are used to add value to a product, providing, among other things, transparency as to its origin and production. Thanks to this denomination, it is possible to confirm which land a piece of ham comes from and that it has been produced in a traditional way, thus guaranteeing its quality.

It is important to remember that some pigs are raised and fattened in areas that are covered by a D.O., however they do not belong to it; this does not mean that they are of a lesser quality, but that there is no guarantee as to the controls and protection that the products from the different D.O.'s are subjected to, therefore consumers usually prefer to buy certified products. 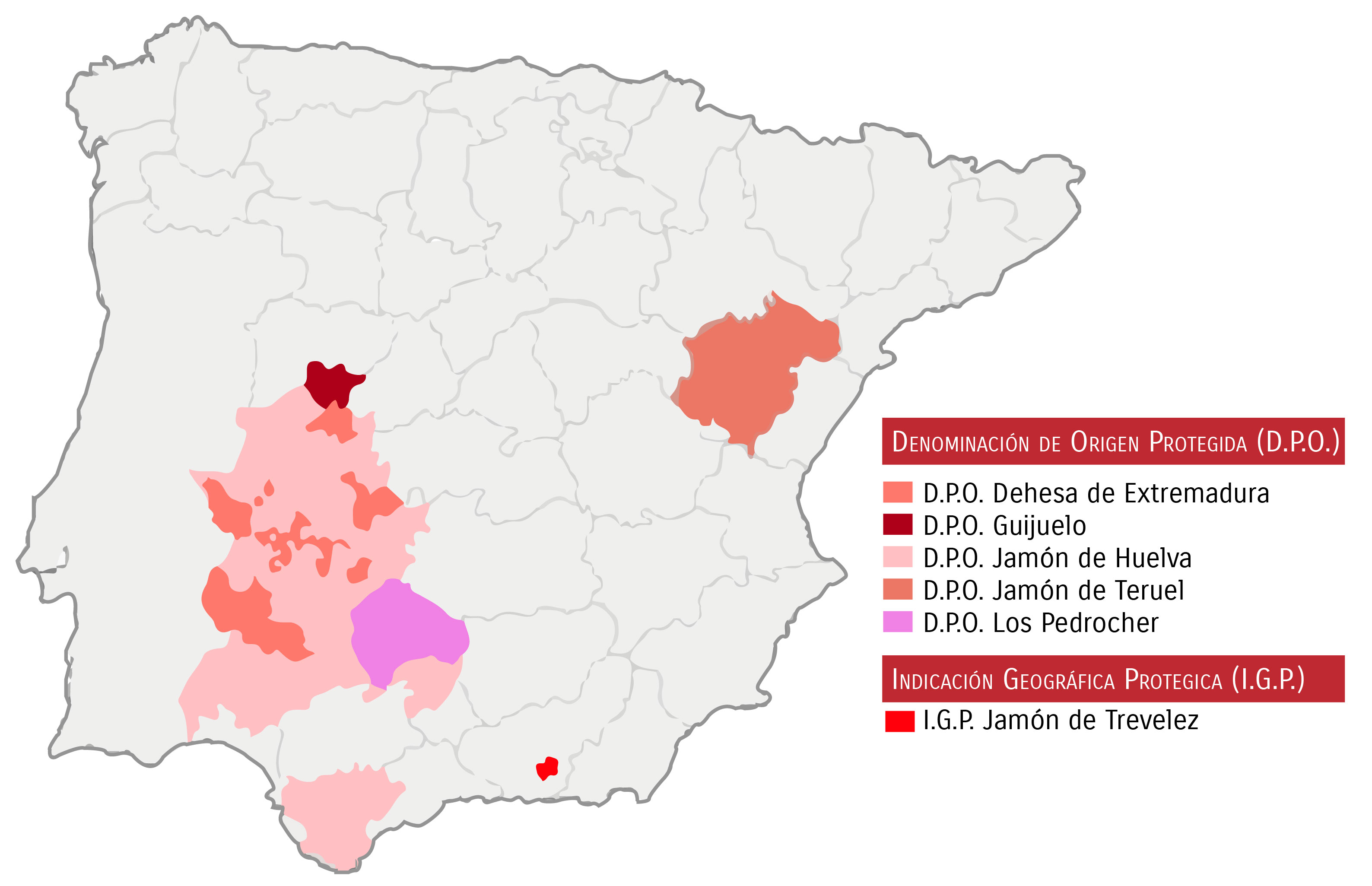 There are 4 D.O.'s that protect Iberian ham and that correspond to four regions in which production takes place, they are: Let's look at each of them:

This D.O. was formerly known as D.O. Jamón de Huelva. Its hams are some of the most famous due to their high quality, and for many people "Jabugo Ham" is synonymous with "Iberian Ham". These Iberian pigs are bred and fattened in the "dehesas" meadowlands of Huelva, Seville and Cádiz, although some also come from Cáceres, Badajos, Málaga or Córdoba, as long as the ham is prepared in the region of La Cierra de Aracena and the Picos de Arocha, in Huelva.

The "Dejesa de Extremadura" is the largest land of this type that exists in the world. Because Iberian pigs require at least one hectare or more per animal for proper feeding, this D.O. has the highest production of hams, shoulder hams and other cured meats. These hams are characterised by having a low amount of salt and pink flesh. This D.O. includes 45 municipalities in Cáceres and 40 municipalities in Badajoz.

These Spanish "dehesa" meadowlands give the hams produced in the province of Salamanca different properties as a result of the cold climate. This ham is characterised by its slightly salty flavour, with hints of a characteristic sweetness; the flesh is pink and the fat impresses with its beige/gold colour. This D.O. is applied to those products made from pigs that were raised and fattened in the meadowlands of Salamanca, although the pigs can also come from Toledo, Ávila, Segovia, Zamora, Seville, Huelva, Córdoba, Badajoz or Cáceres, as long as the production is carried out in the municipalities of Guijuelo.

This D.O. is characterised by its climate, located north of the province of Córdoba, grouping together 32 municipalities in the region. These hams are less fibrous than others and have a very juicy flesh with shiny fat. This D.O. applies to Iberian pigs that comply with certain regulations regarding their breed, diet and production process that is carried out in the "dehesa" meadowlands of the Sierra de Los Pedroches.

Denominations of Origin (D.O.) for Serrano ham produced in Spain

These products are famous among Serrano hams thanks to their quality, as they are delicate and slightly salty hams, with bright and yellowish/white fat, highly aromatic and with a pleasant flavour. The pigs that are used come from the Duroc breed for the father and the Landrace, Large White or a cross between breeds both for the mother. This D.O. marks its products with a star on the skin and the engraved word "Teruel". Their products usually are of a large size, over 7 kilos, and must be produced in the province of Teruel.

These products are also known as hams from the Alpujarra Alta, since they are produced in areas of the mountains in the province of Granada, mainly in the municipalities of Trevélez, Capileira, Bérchules, Pórtugos and Busquistar. These hams weigh anywhere between 7 and 9 kilos, their flesh is a deep red colour with white/yellow fat, with a very sweet flavour.

One unique characteristic of these hams is that once the curing process is finished, they are smeared in lard, which differentiates them from hams made in other regions. They are produced in the town of Serón, but the pigs can come from other areas as long as the breeds are Duroc, Landrace, Pietrain, Chato Murciano, Blanco Belga or Large White.


Other hams produced in Spain

Among the other hams with interesting characteristics is the Porco Celta, which is raised in Galicia and fed with chestnuts. Then there are also the hams that come from "capa negra" pigs that are not Iberian. As for the production method, it's worth highlighting the traditional hams from other regions that are covered and cured in paprika.

Now that we've described the different D.O.'s and I.G.P.'s that protect the Iberian and Serrano ham, which are classified based on breed, production area, and characteristics such as the type of feed, rearing and fattening, we can get a better idea of the differences between these types of ham and what they are attributed to.